Our distillery operates in a closed circuit, making it total energy-independent.

Each stage of SAINT JAMES rum production in the distillery is designed to minimise the impact on the environment.

The sugar plantations near the distillery reduce the journeys needed to transport the sugar cane and therefore the CO2 emissions.

Saint James grows type “C4” sugar cane which is a real carbon sink. Out of all the sugar cane varieties, it is the one which captures the most CO2. More generally, the sugar plantations in Martinique absorb over 20% of the CO2 emitted by local cars.

Bagasse, the fibrous residue left after the sugar cane is pressed to extract the juice, is used as biofuel to create the steam needed to operate the distillation columns and sugar cane crushing mills.

Another part of the bagasse is composted or converted into electricity via a turbo generator.

The vinasse, the liquid residue from distillation, is treated to obtain water which is then used to irrigate the sugar cane fields.

The vinasse is treated to obtain water which is then used to irrigate the sugar cane fields. This avoids pumping water from rivers.

The vinasse is also treated via a biological methanisation process and used to generate electricity.

Bagasse, residues from the fermentation tanks and dust released when bagasse is burnt in the boiler are used as compost to fertilise the fields.

The bagasse is sent to the distillery boilers where it is used as biofuel to create the steam needed to operate the distillation columns and mills.

No fossil fuel is used in this process. The dust released by burning bagasse in the boiler is captured by two successive treatments and used as compost.

Excess steam which is not used in the distillation or crushing processes is sent to the turbo generator unit, causing it to rotate and thus generating electricity. 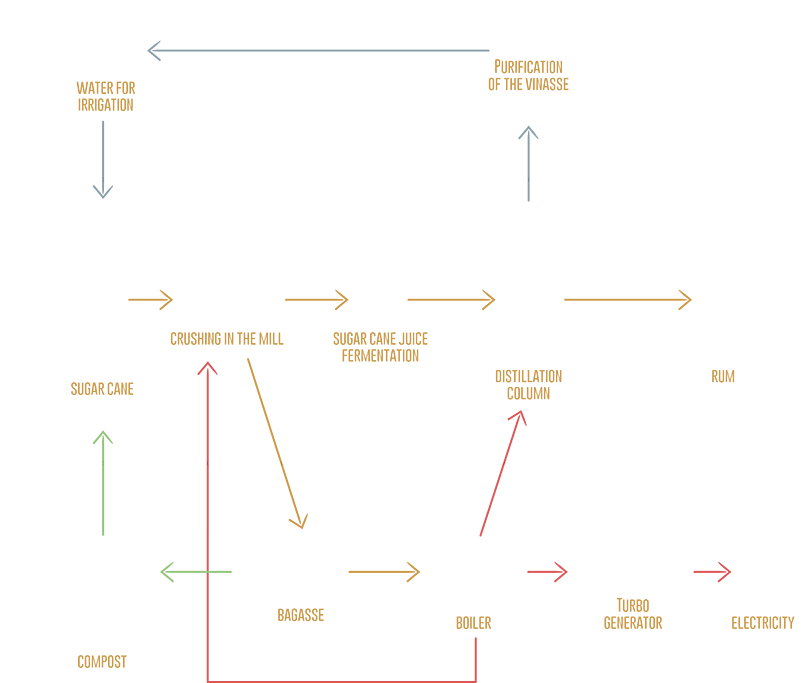